The GeoCache Spring Event was held at the Wickiup off Highway 70 about 35 miles west of Green River. Dennis and I normally go down the first of the week before the crowds gather. This time is no different but the week started out cold, windy and miserable. Heading over to Price, I encountered wind, snow and bad roads. After arriving in Price, Dennis and I finished loading the trailers and headed to the Wickiup about 3:00 pm.

Heading down, we continued to have strong winds but made it to the Wickiup. We had to move the camp as we encountered a guy camped close by. We moved farther north east but close to where we normally were going to camp. After setting up camp, Dennis cooked the kielbasi and I cooked the bacon wrapped cheese jalapeno's along with a salad. It was a great dinner. That night it turned chilly and both of our ater pipes froze. The temp had to be in the teen's.

The next day, we went for a cool ride to the slot canyon that Dennis wanted to take the group on Saturday. I stayed on top while Dennis and Torrey went down into the slot canyon for a ways. The ride back was just as cold but fun to be out exploring Central Utah. After we got back we found out the pipes in our trailers had thawed enough to use the water.  That evening we had company pull in. Mike and Debra came with their son.

On Thursday, we pretty much did what we wanted. I went for a few rides and Dennis went out exploring. Our "Hobo" that was camped close by kept coming over and spending time with everyone. He was a weird one.

Friday, others came in and set up camp. We had a fire set up for Chris and his corn and he did not disappoint us on Friday evening. I understand it was beans not corn on Friday night. It was pretty loud. Saturday, several went to explore the slot canyon but I stayed at camp because Hobo Jack kept wandering around and I didn't want him alone with the women and kids. The guys finally came back and we had our potluck dinner by our trailer because the wind was pretty strong coming out of the west. The dinner was mixed with dirt but was pretty good otherwise.

Sunday, everyone loaded up and headed home. I'm glad Raylene came down on Friday night to join me. I really like camping with her but don't get to do it too often. The only problem I had besides the frozen pipes was my batteries kept draining using my CPAP. After I got home I did some research and found out my trailer is wired wrong and I need a different kind of battery set up. I hope to take care of that before the next trip.

A few picks from the trip; 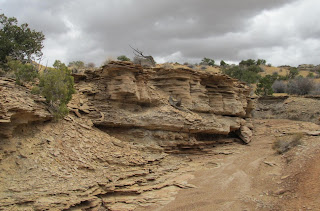 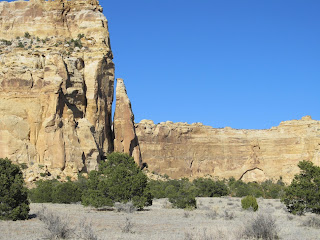 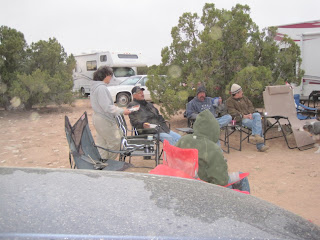 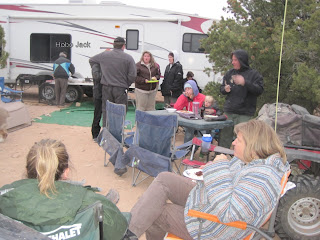 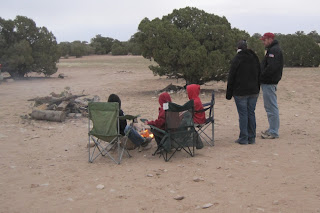