Since Memorial Day was coming up, I wanted to go camping but was not sure where. I have always wanted to visit the San Rafael Swell area but had never been there. I knew that Utah's famous photographer, Mr. Dennis Udink, spent quite a bit of time there so I called him to see where would be the best place to camp. I was surprised when he suggested that I join him and his family camping in Buckhorn Flat for the weekend. What an opportunity, to be able to be taught by one of Utah's best and learn his secret for taking pictures. I jumped at the opportunity and told him I would come to Price (where he lives) and meet him on Wednesday.

On Wednesday, I met Mr. Udink, his wife Traci, their two sons, Michael (the oldest) and Bradley and their dog Torrey.  He gave me the coordinates where they were going to camp and said he and his family would be there on Thursday.  I headed to the camp site which was about just below the Cedar Mountain Ridge area a few miles north of the intersection to Buckhorn Flat. After setting up camp I explored the area and headed over to "The Wedge". 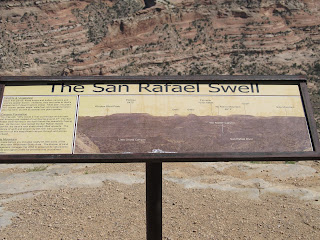 The following day, Dennis and his family came. After they set up camp, Dennis and I headed out to explore an old school bus which had been left in the area for many years. We took several pictures of the bus and of petroglyphs in the area. It was fascinating to watch Mr. Udink preform his work. I could not believe I was witnessing a legend. 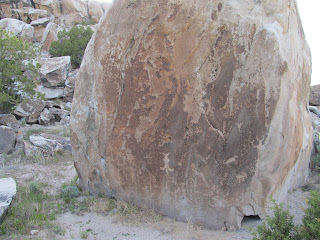 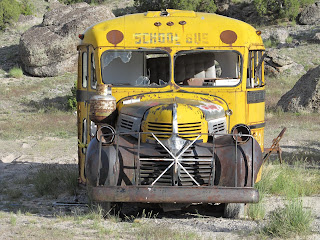 The next day, Friday, I went out with the Udinks exploring Buckhorn Flat. We saw many petroglyphs. Because of all the rain this spring, the area was so beautiful and green. We explored a back canyon that Dennis knew about.  At the end of one of the trails we found a small pool of water and next to it on the ground was a small bat that was having problems flying. It was a special moment to witness the elusive photographer in his element and watch him take close up photos of this bat and other things in the canyon. I learned so much this past weekend and hope I can improve my picture taking skills. 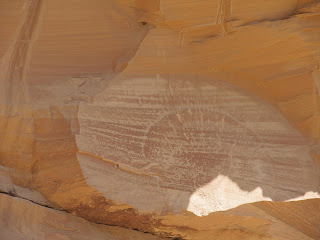 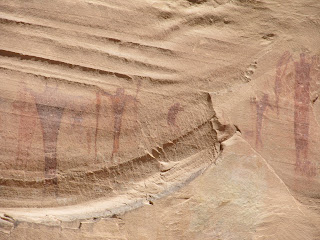 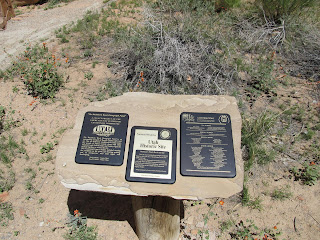 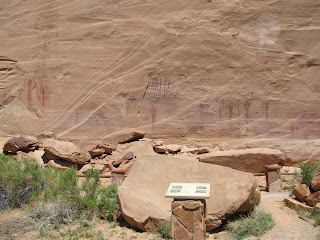 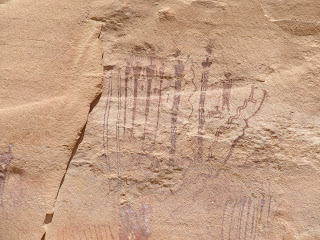 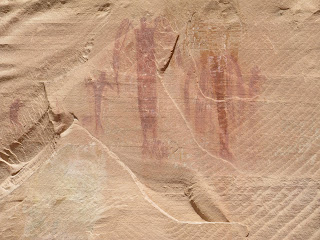 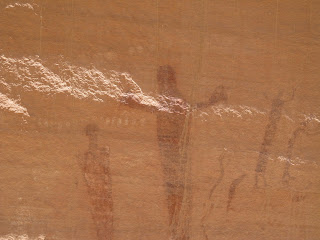 On Saturday, we headed east along the old railroad trail, picking up caches and taking pictures of the area and history. We headed over to Box Flat by one of Dennis' caches. He and his family headed out to explore a natural cave in the area. It is not very accessible and you could stand right next to it and not see it which is a good thing. It has not been spoiled by humans. The cave goes back quite a ways and is very cool. Dennis noticed water running close by and did some more exploring. I sat up on the ledge as getting to this natural cave would be hard for me to get to with my bad knee.But I did do my own exploring from above. 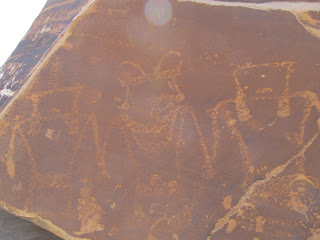 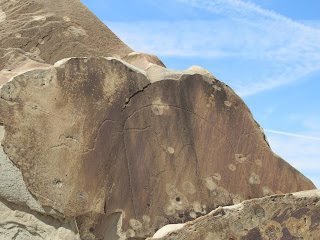 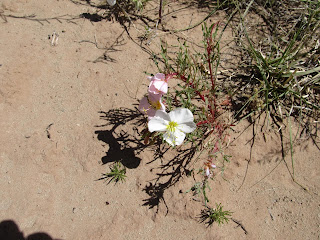 On Sunday we took a short ride south to the San Rafael river and Hamburger rock. After the ride, Dennis wanted to explore back behind camp and wanted to find a road that had eluded him on previous visits. I guess he didn't want to share all of his secrets with me but what he did will help me in my quest to become a good photographer. 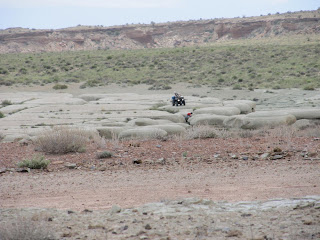 Dennis and his family left Sunday afternoon (after the wind died down somewhat) and I left Monday morning because the wind was usually calmer at that time. The wind blew the whole weekend and at times the gust really shook the trailers. If things were not tied down, they were gone.  I hate the wind. All in all, it was a great weekend. Not only did I get to see a part of Utah I have always wanted to visit, I got to spend time with Utah's famous photographer. What a memory. 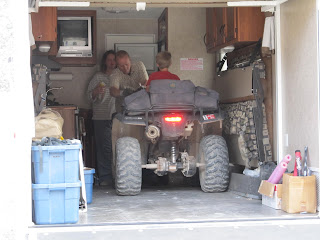