I have been spending a lot of time working both UGA and USGA (golf) events. I was kind of burned out so when Jeff Bowles called to go riding on Saturday up to Soapstone Basin, I decided to go camping and get away for awhile. I didn't realize that it was the last weekend before school started and the opening of the archery hunt. 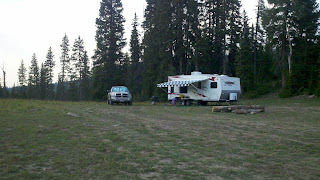 I told Jeff I would go up early and see him and Ken (Cluff) on Saturday. Jeff mentioned he would bring a few friends. I left Tuesday and headed to Soapstone Basin road but when I got to the top, there were campers everywhere. I decided to head on up to Wolf Creek pass and then over to Cold Springs (7 miles) and Silver Meadows (3 miles). There were trailers and sheep herders on top but down by Silver Meadows I found a good spot to camp. As I set everything up I realized I forgot my CPAP machine. Needless to say, I didn't sleep well that night even though it got down to about 40 degrees.

On Wednesday, I decided to drive home and get the CPAP and a few other things I forgot. It was only 70 miles one way. It was nice to come down as phone service does not work in the mountains. I could get  sporadic service (messages) up at Silver Meadows. Kind of nice not to have service at times. Wednesday night I hooked up the CPAP and about 2:00 in the morning alarms in the trailer were going off. For whatever reason, my batteries were not holding a charge and the CPAP drained the batteries. The last time that had happened was at the family reunion when I tried to hook up two CPAP's (mine and Jack's - my new father in law) together. 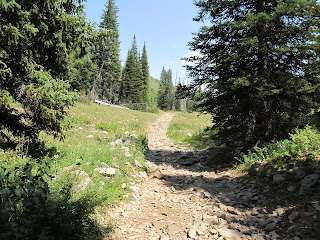 Thursday I went out exploring with the ATV and found a trail I probably should not have gone on by myself. I tried to be careful and avoided some of the really steep hills but it was still spooky in a few spots. More campers came in today and one couple camped out in the weeds a few hundred yards from me. I could not believe it as it was not really a camp site, just a flat area.

Friday, I went down to Kamas to make a phone call as I had received some messages. Ken was down in St. George and mentioned he could not come but had his weeks mixed up and realized he could make the trip. It's always good to have him come riding. He recently had his hip replaced and at 77yrs old, I value every time I get to go out with him. I went hiking around camp when I came back and that evening I left the generator on all night so I could use the CPAP. It might not have been noisy for others, but I heard it all night long. So I decided to come home after the ride on Saturday.

Saturday morning about 8:30 Ken showed up and we unloaded his ATV and then sat around until Jeff and his friends came about 9:00 am. Jeff brought his and Ken's bishop and a grandson (about 18yrs old). I had ridden with them up at Hobble Creek a few years ago. I also met another friend, Allen.

They wanted to go up to Lighting Ridge so I led out. Along the way we found a few mud puddles to play in which Jeff did. I was hesitant at first but decided I needed to get wet. I ran through one and Jeff followed. However, he hydroplaned through it and turned his wheels the wrong way. His machine dumped him off and almost came down on top of him. My adrenaline kicked in and I helped him right side his ATV. That kind of scared me. You see that kind of thing happen on TV but until it happens to you, its not real. I think Jeff will have a few bruises on his hip and back side but he did not have any broken bones. Just to make him feel better, I decided to go through the same puddle again. I even got him to go through but slower.

We headed up to Lightning Ridge but could not get really good pictures because of all the fires in the State and surrounding areas. You could see Mt. Baldy and Iron Mt but the Grand Daddies were smoggy. I hate taking pictures on smoggy days but did take a few. We had lunch and took a break for a bit and watched several groups come up to look over the edge of the cliffs. This place always gives me the creeps as I have a fear of heights. I just keep my distance from the edge unlike Ken who loves to drive right up to the edge. 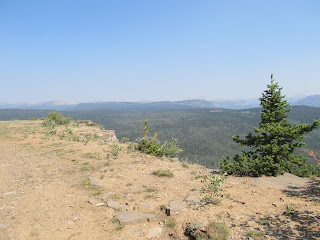 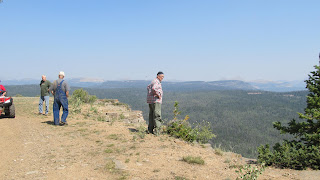 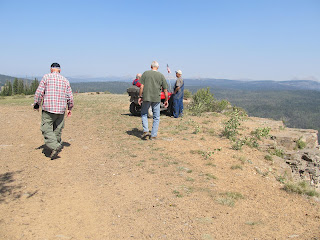 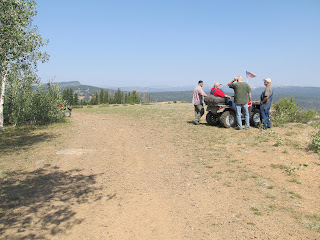 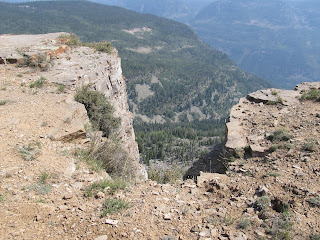 After Lightning Ridge we took a different way down and then headed to Soapstone Basin to where I had gone on my solo ride a few days ago. This time the trail seemed easier for some reason. It was just as rocky but I guess with friends around, I didn't think anything would go wrong. Ken had already headed back to camp to rest so it was Jeff, Allen, their bishop and his grandson and myself.

When we got back to camp, Ken had already loaded up and gone home. Jeff and Allen helped me finish loading the trailer and we headed home. All in all it was a fun week but I am concerned about my batteries. Got to go get them checked out before the next adventure in September. Gotta go fishing!

Additional pictures of the area: 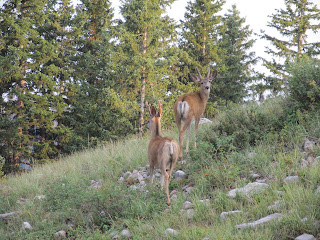 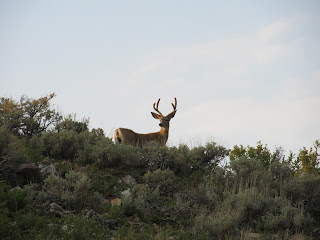 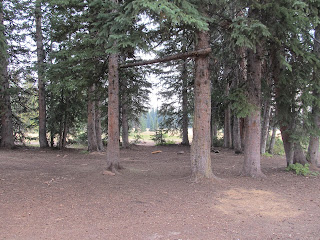 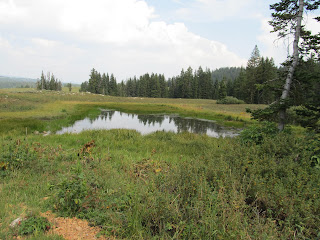